Installing Google Chrome Remote Desktop on Debian Wheezy 64bit is possible but there is a caveat:

YOU NEED TO RUN GOOGLE CHROME INSTEAD OF THE CHROMIUM BROWSER

If you run Chromium you can install the Remote Desktop app but it won’t run.

(I don’t think there are any differences between the 32 and 64bit versions of the browser and the extension; I’m just doing this on a 64bit system and haven’t tested on 32.)

So if necessary first uninstall Chromium. No use running Chrome twice. You can, I suppose.

Second, go to https://google.com/chrome and download the appropriate .deb file (mine was called google-chrome-stable_current_amd64.deb). Then install it:

If aptitude mentions unmet dependencies, do

Third step: download the Remote Desktop App from the Apps page (or just Google it). My .deb file was called chrome-remote-desktop_current_amd64.deb.
Install the app:

Then run the app from the app page in Chrome. It asked me about ten times to authorize but in the end it worked and I was able to run the Google Chrome Remote Desktop app without any problems. 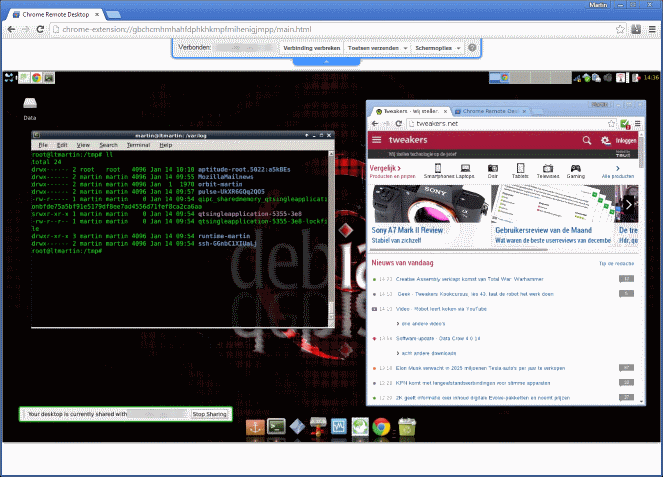 Some notes:
– Google says they create a logfile in /tmp/Chrome* but I haven’t been able to find it.
– Adding your Linux machine to the My Computers list not yet supported on the day of this writing.
– This page may be of use.
– Chrome has excellent Active Directory group policy support. I’m planning on switching from UltraVNC and TeamViewer to Chrome Remote Desktop for tech support to my users.
– There’s a feature in GCRD called Curtain Mode. This is essentially the difference between msrdp and msrdp /admin. The ‘/admin’ equivalent is the default in GCRD: to take over the computer and the user’s session so that the user (your co-worker for example) can see what you are doing on her computer. Enabling curtain mode on her computer disconnects her from her own session so she’ll see the ‘Press ctrl alt del to logon’ screen while you’re working in her session. Your activities are hidden (or ‘curtained’) for her. Here’s how to enable it: https://support.google.com/chrome/a/answer/2799701 and bunch of other settings. This only works on Windows computers that allow Remote Desktop.