And then I lost it.

Now I resurrected it because it can be very useful and several people asked me for something like it.

Jargon
To explain what is special about mbackup, let me first elaborate a bit on backup jargon.

The archive bit: this is a file attribute (like the ‘hidden’ bit and the ‘system’ bit) that the filesystem applies to a file which tells backup software if a file has changed since the last backup. If it is zero, the file has not changed or is not newly created. When the file is changed Windows toggles the bit so it is set to one and backup software knows it must create a backup of the file. The backup software then sets the archive bit back to zero to indicate is was backed up.

There are several backup types.

Copy: a full backup but ignores the archival bit. Look at it as an out of cycle, an extra backup. Also a copy does not change the archive bit.

Incremental: a backup of files that were created or changed (=they had their archive bit set to one) after the last backup (either full, incremental or differential). Sets the archive bit back to zero.

Differential: a backup of files that were created or changed after the last full backup. Necessarily, a differential backup honours  but does not change the archive bit.

A backup system usually combines the above backup types. The most common example is this one:

Restoring
Restoring a full backup or a copy is easy: just copy all the files back to their original locations. However it can take a long time to create a full backup.

I had a lot of data and backup tapes weren’t very cheap so I used usb drives to store my backups. Harddrives back then weren’t very large however…

The problem with third party software
I tried several commercial and free backup software packages but none were simple to use, quick to make a backup and easy to restore. Some got close but my objection to them was that I needed to install the ‘third party’ software, store the installation files and hope that the software would still be around when the backup would ever be needed.

Some backup packages create huge databases in which they store everything. I like to be able to verify my backups without using the software that created it because you don’t know in which circumstances you will need to perform the restore.

Also, I like to be able to quickly and easily search through my backups.

The solution
I wanted a system that combined these features:

There is nothing preventing us to create a second (or third, fourth, etc.) pointer to the same file from different locations in the presentation layer! Such new pointers to ‘existing’ (that is, they already have a pointer to them) files are called hardlinks.

If you make a hardlink the file, for all intents and purposes, exists in both locations. If you delete one, you really only delete the pointer from the NTFS presentation layer and so the file in the data layer and the first pointer are left alone: if you delete one, the other file will still exist. If you change it however the ‘other’ file changes along with it – it is stored only once and therefor hardlinks do no require extra disk space.

On a side note: deleting a file from Windows removes the NTFS presentation layer pointer to a file, not the file itself (unless the partition is on an SSD drive, but that’s a different tale…) which is why we are able to use undelete tools.

This is how mbackup works: the first time it creates a full backup. Subsequent runs first duplicate the folder structure but not the files and then creates hardlinks of all files from the previous backup (provided they still exist in the source directory). Then the new backup is updated with new and changed files from the source.

The result is a backup containing folders of full backups at the cost of one full backup plus incrementals.

If you have a disk containing 1TB of data and you change 50MB of data on every day, you can store ten year’s worth of FULL backups on a 2TB disk and have room to spare for a couple of zombie films.

One more thing I built into mbackup. My users accessed their files from a mapped network share. You know users: they will reach any limit eventually. Thus they regularly reached the Windows maximum path length limit: 255 characters. They tended to make files called something like

P:\325.004\Project\projects\documentation of new version\laurent’s second verified version\sent to customer\yesterday\backup\old\Concerning the creation of filenames on Windows NTFS filesystems using a typewriter and rather creative mind – version 12.pdf

Now on the client computer that might be ok but if the physical location on the server of the client’s P:-drive is D:\User data\common\ the file is 17 characters over the maximum path lenght limit and xcopy will choke on a ‘memory error’. Other (mostly free) software have this problem as well.

My workaround is using the subst command, Windows’ equivalent to UNIX’s mount command. With subst you can have a volume X: (for example) ‘mounted’ to a path D:\User data\common\ (again, just an example). From X: the path character count is then reset.

To put it a bit more formal:

Ok, here comes the script. I refrained from using third party components but you could easily upgrade it with:

My original implementation even wrote output to a web interface. Its easy: have the script log errors (check %errorlevel% after important commands), analyse the log file and create an html file from it, then upload the file to a webserver.

Note that I will probably change bits and pieces of the script in the next couple of days.

I encourage you to modify the script for yourself, especially the xcopy parameters (type xcopy /?).

Notice that in the course of a month I have used about 650 pyshical GB of data while the backups take up 10.6 TB. 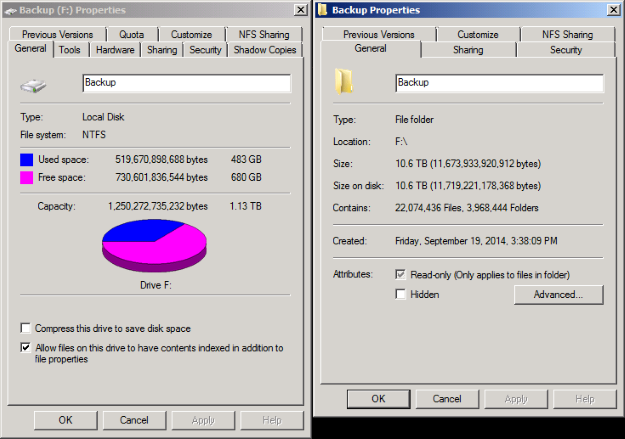 All 25 folders contain a FULL BACKUP. 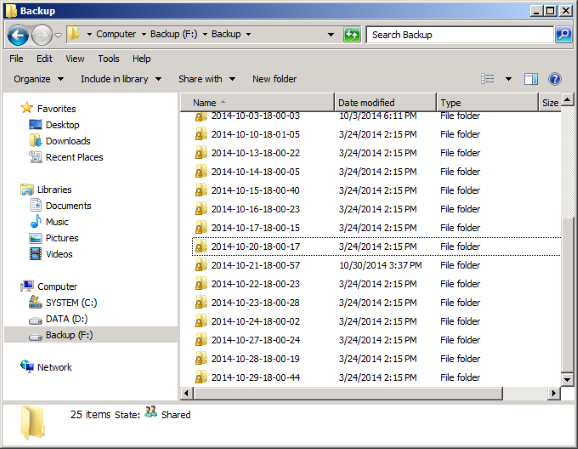 Since I’ve used robocopy I haven’t had any more issues with pathnames being too long. The drawback is that rmdir doesn’t suffice anymore so to be able to delete a backup folder I’ve had to create my own tool and integrated it into mbackup.

If you need to delete a backup folder and rmdir can’t do it, use